A little more than two years after a devastating fire, Goshen Historic Track added a new page to its vibrant history. The World’s oldest active harness racing track and historic jewel of Orange County hosted a ribbon-cutting ceremony to celebrate a newly constructed barn and horse stalls on the site of the old BOCES Barn that was partially destroyed by fire on August 23, 2017. It was so named because it was an extension of the Board of Cooperative Educational Services when it functioned as a training center focusing on equestrian care and farm management.

Since then, working closely with preservation architects and engineers from Goshen-based LAN Associates, the Historic Track and the Harness Racing Museum & Hall of Fame have endeavored to replace the lost structures with the goal of preserving much of their original character while providing the museum with safe housing for its valuable artifacts.

Thanks to a generous donation from the Messenger and Fleming families, and a matching grant from New York State, the new barn was renamed the “Fleming Barn,” in honor of Charles M. Fleming, a distinguished Standardbred trainer and driver at the famous track in the 1950s and 1960s.

Sunday’s ribbon-cutting ceremony heralded the preservation of a tradition. Goshen is known as the “Cradle of the Trotter” because it was in that town, circa the 1840s, that the first American Standardbred horses were foaled, trained and bred for the then uniquely American sport of harness racing. From the turnout crowd that included Steve Brescia, County Legislator and Mayor of Montgomery; John Vero, County Legislator; and Joseph Faraldo, Esq., President of the Standardbred Owners Association of New York, it was fully evident that the tradition will continue to be as exciting and colorful as ever. There are also plans for expanding the functionality of the Historic Track to accommodate a host of community-oriented services and events.

The Board of Directors for Goshen Historic Track and The Harness Racing Museum & Hall of Fame are grateful for the generous support from the Standardbred Owners Association of New York, Arden Homestead Stable, Hempt Farms, Cameo Hills Farm, United States Trotting Association, Ron & Diane Burke, Mr. & Mrs. Lawrence DeVan, Mickey & Sylvia Burke and the Bosler family. Their charitable donations went towards the completion of a blacksmith shop and horse stalls that retain the historic charm of the original structures while housing modern water, electrical, waste management and HVAC systems.

From the start, supporters of Goshen Historic Track said “It Takes A Village To Raise a Barn” but always knew that it would require a wider range of support to rise from the ashes. The Harness Racing Museum & Hall of Fame, as well as the Historic Track, are grateful that so many people from so many places rose to the occasion. Barbara Martinez, Executive Director of the Goshen Chamber of Commerce, deserves special thanks for promoting the vital project.

Of special mention, also present were George Casale, Board Member and General Counsel of Goshen Historic Track; Bill Murray, Track Board Member and Chairperson of Buildings and Grounds; and Janet Terhune, Harness Racing Museum & Hall of Fame Executive Director, who worked tirelessly on the project from its inception. 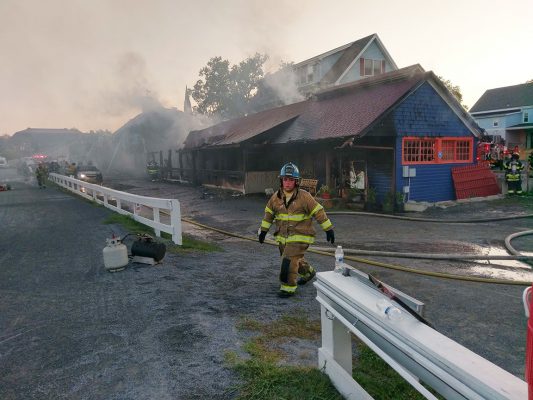